In my childhood, as soon as a cold was coming on, we always had chicken soup. It was simmered on the cooker for a long time, then topped with alphabet noodles and decorated with a little parsley. I remember that I didn’t always do a dance of joy when it was on the menu, but I did spoon it up. In my student days, I neglected them somewhat. It seemed too time-consuming, too old-fashioned, too „granny-like“ to cook chicken soup. Until a pretty cool friend 🙂 told me that she often cooks one for herself when she has a cold – then she was back on track! And now, at the latest, as a mother, I have long since rediscovered it. Chicken soup is tasty and nutritious, a super simple and effective home remedy during cold season!

As I reported in my post on natural home remedies for colds, chicken soup has an anti-inflammatory and decongestant effect on mucous membranes, partly due to the amino acid cysteine it contains and the abundant zinc. It also liquefies the tough mucus better than hot water alone (1). Laboratory tests have shown that the movement of a certain subgroup of white blood cells, the so-called neutrophil granulocytes, is slightly inhibited by the soup. This could be one reason why cold symptoms are milder after drinking chicken soup (2).

As early as the 10th century, the Persian physician Avicenna is said to have documented the positive effects of chicken soup. The 12th century Jewish physician Maimonides, who belonged to the school of humoral pathology, recommended it for an imbalance of the „humours“. In particular, he prescribed it for asthma and in the early stages of leprosy (3, 4). Maimonides based the quality of a good doctor primarily on how often his patients became ill. Accordingly, the prevention of disease was considered the doctor’s main task. Chicken soup, also known as „Jewish penicillin“, is thus recommended not only for therapy but also for the prevention of infectious diseases (5).

So how is chicken soup prepared?

To ensure that the broth is full of good nutrients, it is important to buy good organic ingredients. You can either buy a bunch of greens or the ingredients (carrots, leeks, celeriac and parsley) individually. You also need a large white onion. The parsley is added just before the end. If you prefer clear broth, you can pass the soup through a sieve. If you want more, you can add soup noodles, rice or semolina dumplings. The chicken meat can be eaten in the soup or used for other dishes. The broth can then be stored in the refrigerator or frozen. This way you always have some in stock if needed ! It is suitable as a base for soups and stews and can also be sipped when you have a „thirst for salt“ :).

The soup can be prepared in the classic way in a pot on the cooker, or in the slow cooker. I decided to buy a slow cooker * because it can simmer without me having to be there. So I often leave the soup to cook overnight. Cooking times of up to 20 hours are no problem!

Ingredients for chicken soup according to my grandma’s recipe :

Fill up with cold water until the chicken is covered. Add a sip of vinegar, the bay leaves and bring to the boil. Skim off the foam that forms. Then reduce the heat and simmer on low heat for at least 6 hours, ideally up to 20 hours (in the slow cooker first about 2 hours on „high“ and then the rest of the time on „low“). Season with salt and pepper at the end.

Take out the chicken, let it cool a little and remove the meat from the bone (if not already done on its own). Be sure to keep the bones small when eating! To serve, garnish with fresh parsley and drizzle some lemon juice over the soup.

It goes very well with a thick slice of dark farmhouse bread with thick butter and salt! Bon appétit! 😊 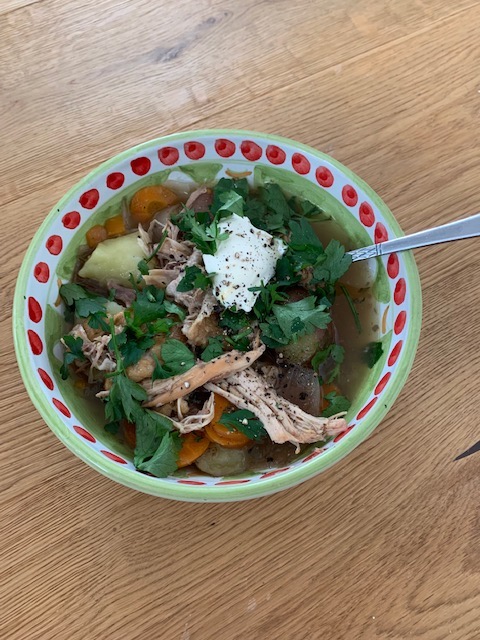 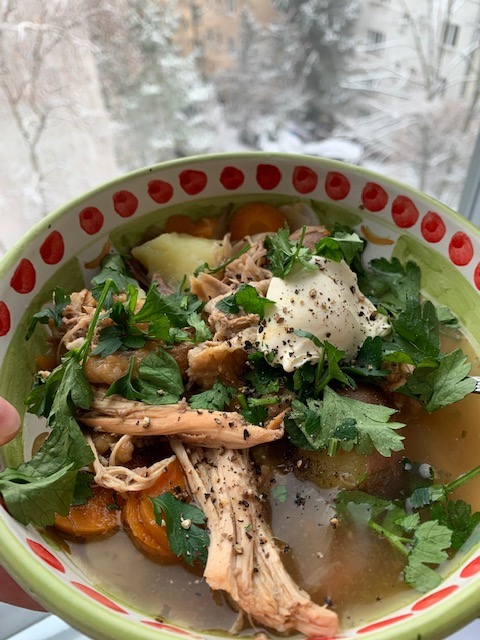 I wish you lots of fun and good luck with the preparation, and I hope that the soup will prevent one or two colds.